What one thing do all successful people have in common? What one thing separates those who go to the top from those who never seem to get there? The answer: Good Thinking! Those who embrace good thinking as a lifestyle understand the relationship between their level of thinking and their level of progress. They also realize that to change their lives, they must change their thinking.

You will become as small as your controlling desire, as great as your dominant aspiration – James Allen

Real thinking is hard as most of us would rather DIE than do it. Here are the top 20 quotes on thinking that could help stimulate you into thinking:

2. My guess is that well over 80 percent of the human race goes through life without a single original thought.- Author H. L. Mencken

3. Everything begins with a thought. “Life consists of what a man is thinking about all day.” –RALPH WALDO EMERSON

Good thoughts and actions can never produce bad results; bad thoughts and actions can never produce good results. This is but saying that nothing can come from corn but corn, nothing from nettles but nettles. Men understand this law in the natural world, and work with it; but few understand it in the mental and moral world (though its operation there is just as simple and undeviating), and they, therefore, do not cooperate with it – James Allen

6. Thinking is hard work; that’s why so few do it.- Albert Einstein

The problems we face today cannot be solved on the same level of thinking we were at when we created them. – Albert Einstein

7. Ninety-nine point nine percent of all employees are in the pile because they don’t think.—Jack Welch

8. Nurture great thoughts, for you will never go higher than your thoughts.—BENJAMIN DISRAELI

9. A great many people think they are thinking when they are merely rearranging their prejudices. – William James

10. If everyone is thinking alike, then somebody isn’t thinking. – George S. Patton

11. The actions of men are the best interpreters of their thoughts.–JOHN LOCKE

Change in thinking doesn’t happen on its own. Good ideas rarely go out and find someone. If you want to find a good idea, you must search for it.

12. For the Flower to blossom, you need the right soil as well as the right seed. The same is true to cultivate good thinking. – WILLIAM BERNBACH

13. Most of the mistakes in thinking are inadequacies of perception rather than mistakes of logic. – Edward de Bono

14. It is neither good nor bad, but thinking makes it so.— William Shakespeare

17. Thinking is easy, acting is difficult, and to put one’s thoughts into action is the most difficult thing in the world. –Johann Wolfgang von Goethe

18. It is the mark of an educated mind to be able to entertain a thought without accepting it.  – Aristotle

All the Best in your quest to get better. If you don’t think, you stink. Don’t Settle: Live with Passion. 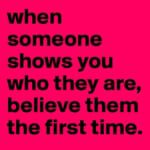 When someone shows you who they are, Believe them.