Frank Gehry, one of the most expressive and creative architects in the world, teaches his unconventional philosophy on architecture, design, and art.

Frank Gehry was born in 1929, in Ontario, Canada, where he lived until immigrating to Los Angeles, California, USA, in 1947. Frank graduated with a Bachelor of Architecture degree from the
University of Southern California in 1954. From 1969 to 1973, he designed a furniture line called
Easy Edges. The curved, swooping forms of his chairs, all constructed from corrugated cardboard,
foreshadow the movement he wanted to express in future designs, like the Walt Disney Concert
Hall in Los Angeles and the Dancing House in Prague. An accomplished architect and designer,
Frank has won many awards, chief among them the Pritzker Architecture Prize (often referred to
as the Nobel Prize of architecture) in 1989 and the U.S. Presidential Medal of Freedom (the nation’s highest civilian honor) by Barack Obama in 2016.

The mission of an architect is to design something that one would want to be a part of, something one would want to visit and enjoy in an attempt to improve one’s quality of life. Architecture is the quest to transfer the feelings of humanity through inert materials. You want to create a feeling or emotional response that is not only comforting but enlightening.

At the end of the first semester of his second year of college, Frank’s professor told him architecture was not the profession for him and suggested that he find another field of study. Frank ignored the advice. Many years later, Frank ran into the professor, who admitted his mistake. When someone says you’re not cut out for something, assess your critic and what he or she stands for, and decide if you agree. Harness the strength that comes from his or her statement. It will keep you going.

Be Curious – Learn from other masters

Always be curious, and let architecture open the door to different subjects, such as philosophy, literature, and music. Regardless of your profession, apply the self-propelled creativity required of an architect to your field or daily life. Study the great architects—Le Corbusier, Zaha Hadid, Lina Bo Bardi, Borromini, Bernini, Michelangelo, Brunelleschi, Oscar Niemeyer, Louis Kahn, Julia Morgan, Ludwig Mies van der Rohe, Eliel Saarinen, Louis Sullivan, Frank Lloyd Wright—but remember that it is your conscience, your talent, and your mind that has a responsibility to others.

Designing a building is like playing jazz. You improvise, you respond, and you work intuitively to create something. The idea evolves and things happen, and you go with it. Trust it, don’t overthink it, and allow it to take you somewhere new. The job of an architect is sometimes fraught with anxiety, so embrace the struggle and take risks. Have a firm idea for your project from the start, but also create the logic for it as you go.

Creative block is merely an excuse you make in order to delay the process.

Never stop being influenced by the work of others. Frank reads, studies, and observes many sources and mediums, and believes this encourages and engages one in his or her architectural work. There is no substitute for it. Be curious and seek out great works from the past. Don’t copy them but rather try to understand them.

You have to be curious and search out these great works from the past. Not to copy them, but to at least understand what [they] meant.

Throughout your career, you will constantly have small victories and make small mistakes. You must keep moving ahead, learning from the mistakes, and building on the successes. There will be continual evaluating, re-evaluating, missed and seized opportunities, and bad and good advice. The people involved in projects are like pieces of a puzzle that you have to put together. At the end, everything should fit perfectly.

Frank has run a successful architecture firm since 1964. In this chapter, he presents some of the tenets of his business model: no free labor, no borrowing money, and no signing on for projects with clients he doesn’t like. He’s careful with whom he takes on as clients, as he knows he will be spending a lot of time with them.

Understand your clients’ intentions before you sign on, and if you don’t feel comfortable, pass on the project. 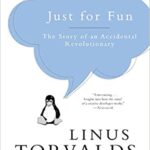 Just for Fun by Linus Torvalds. 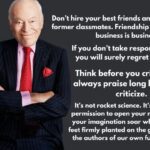 Quotable Quotes – The Company I Keep by Leonard Lauder.