Leonard Alan Lauder was born in 1933 in New York City, where he grew up and helped his mother as she founded what would become The Estée Lauder Companies business out of the family’s kitchen. According to Forbes, Leonard is the 68th richest person in the world with a net worth of $USD 23.2 Billion. Leonard and his brother,  Ronald Lauder, are the sole heirs to the Estée Lauder Companies cosmetics fortune, founded by their parents, Estée Lauder and Joseph Lauder, in 1946.

In his autobiography, The Company I Keep: My Life in Beauty, Leonard writes about not completing his MBA program at Columbia Graduate School for Business:

“I had attended the Columbia Graduate School for Business and was three credits shy of my MBA before joining the Navy. I promised myself that I would complete graduate school when I finished my Navy service. But after three years at sea and seeing the world through a new lens, I was ready to get to work at Estée Lauder, not go back to school. I never did get an MBA degree, but I don’t think I missed anything. I learned just as many practical lessons from my father.”

After serving in the U.S. Navy as a lieutenant and later a Navy reservist, Leonard officially joined the  Estée Lauder company in 1958. He focused on growing the business and building the company’s research and development laboratory. Proving himself an industry pioneer and true business innovator, He served as President from 1972 to 1995, CEO from 1982 to 1999, Chairman from 1995 to 2009, and, finally, as Chairman Emeritus. In over five decades of leadership, he transformed the company from a small brand with eight products sold in one country, to a multi-brand, beloved global icon.

Lauder stepped down as CEO in 1999. He is now chairman emeritus and is known around the company as “Chief Teaching Officer.”

On January 1, 2015, Mr. Lauder married Judy Ellis Glickman, a philanthropist and internationally recognized photographer whose work is represented in more than 300 public and private collections, including the J. Paul Getty Museum, the Whitney, the Metropolitan Museum of Art and the United States Holocaust Museum.

Leonard Lauder gifted his massive Cubist art collection, worth more than $1 billion, to the Metropolitan Museum of Art in 2013.

Leonard publishes his memoir The Company I Keep: My Life in Beauty, where he shares the business and life lessons he learned while turning the business his mother founded into a global icon. 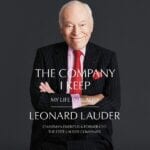 Book Summary: The Company I Keep: My Life in Beauty by Leonard A. Lauder 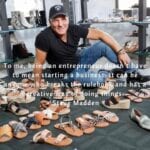