I was the youngest heavyweight champion in the history of boxing. I was a titan, the reincarnation of Alexander the Great. My style was impetuous, my defenses were impregnable, and I was ferocious. It’s amazing how a low self-esteem and a huge ego can give you delusions of grandeur.

At the height of Iron Mike Tyson’s career, he was earning approximately $30 million per fight. He was the youngest person (20) to become the youngest heavyweight champion in history. He made over $400 million in his 30 years (1985-2005) boxing career. He lost all of his wealth due to financial indiscipline, substance abuse, infamy, sex addiction and numerous litigations.

“Show me a hero and I’ll write you a tragedy.” – F. Scott Fitzgerald

In his autobiography, Undisputed Truth, Mike Tyson reveals how he got into boxing, his early influences, his love for boxing, dealing with fame, his battles with women, drugs, alcohol, sex and depression. Tyson lays bare his story in a raw and vulnerable fashion. Reading his autobiography made me cry and laugh a lot, as Tyson is not ashamed of making fun of himself in a self-deprecating manner. Tyson’s life can be a warning of how not to get carried away and an example of what it takes to become great. A lesson in dealing with adversity, addiction and becoming resilient. In 2003, Tyson declared bankruptcy, having lost most of his money due to reckless spending, love for the fast life, and partying hard. He is estimated to have spent $6.3 million on cars.

“Your life, my life, the life of each one of us is going to serve as either a warning or an example. A warning of the consequences of neglect, self-pity, lack of direction and ambition… or an example of talent put to use, of discipline self-imposed, and of objectives clearly perceived and intensely pursued.” – Jim Rohn

“I often say that I was the bad seed in the family, but when I think about it, I was really a meek kid for most of my childhood. I was born in Cumberland Hospital in the Fort Greene section of Brooklyn, New York, on June 30, 1966. ”

Tyson’s biological father is “Percel Tyson” according to his birth certificate, but the man he had taught to be his father was a pimp named Jimmy Kirkpatrick. Tyson was raised by a single mother who did anything to provide shelter for his kids.

The family lived in Bedford-Stuyvesant and eventually moved to Brownsville due to financial issues when Tyson was ten years old. Tyson’s mother died when Tyson was 16 years old, leaving him in the care of boxing trainer and manager Cus D’Amato, who would become his legal guardian.

“My mother, Lorna Mae, was a New Yorker but she was born down south in Virginia. Everybody liked my mom. When I was born, she was working as a prison matron at the Women’s House of Detention in Manhattan, but she was studying to be a teacher. She had completed three years of college when she met my dad. He got sick so she had to drop out of school to care for him. For a person that well educated, she didn’t have very good taste in men”

“I don’t know much about my father’s family. In fact, I didn’t really know my father much at all. Or the man I was told was my father. On my birth certificate it said my father was Percel Tyson. The only problem was that my brother, my sister, and I never met this guy.”

“We were all told that our biological father was Jimmy “Curlee” Kirkpatrick Jr. But he was barely in the picture. As time went on I heard rumors that Curlee was a pimp and that he used to extort ladies. ”

Tyson grew up around neighbourhoods with high crime rates. He was caught up in petty crimes such as stealing and robbing people of their valuables. By age 13, he had been arrested more than 38 times. He was eventually sent to the Tryon School for Boys in Johnstown, New York. Tyson’s passion for boxing was discovered by Tryson School for Boys youth supervisor and former Boxer Bobby Stewart, who introduced him to boxing trainer Cus D’Amato. Tyson dropped out of high school as a junior to focus on his boxing career.

“We kept getting evicted in Brownsville too. That happened quite a few times. Every now and then we’d get a decent spot, crashing for a short time with some friends or a boyfriend of my mother’s. But for the most part, each time we moved, the conditions got worse – from being poor to being serious poor to being fucked-up poor. Eventually we lived in condemned buildings, with no heat, no water, maybe some electricity. In the wintertime all four of us slept in the same bed to keep warm. We’d stay there until a guy would come and kick us out. My mother would do whatever she had to do to keep a roof over our heads. ”

It was so traumatic, but what could you do? This is what I hate about myself, what I learned from my mother – there was nothing you wouldn’t do to survive.

“Whoa. I always thought I was shit. My mother had told me I was crap. Nobody had ever said anything good about me. And here’s this dude saying, “I bet you if you try, you could win an Oscar. You’d be just as good an actor as you’d be a boxer. You want to be a race-car driver? I bet you’d be the best race-car driver in the world; you’re smarter and tougher than those guys. You could conquer any world. Don’t use that word ‘can’t.’ You can’t say ‘can’t.’ ”

“If you listen to me, I can make you the youngest heavyweight champion of all time.”

Tyson’s first title fight was on November 22, 1986. He fought against Trevor Berbick for the World Boxing Council (WBC) heavyweight championship. Tyson knocked Berbick down in the second round by TKO and, at the age of 20 years and four months, became the youngest heavyweight champion in history. He clinched the WBA and IBF titles after defeating James Smith and Tony Tucker in 1987.

Tyson unified the heavyweight division after defending his EBC title against James Smith on March 7, 1987, in Las Vegas, Nevada. He added Smith’s World Boxing Association (WBA) title to his collection due to his victory. He added the International Boxing Federation (IBF) title, after he won by unanimous decision against Tony Tucker.

Through these sets of victories, Tyson became the first heavyweight champion to unify the three major belts – WBA, WBC and IBF – all at the same time. Tyson reigned as the undisputed world heavyweight champion from 1987 to 1990. He won his first 19 professional fights by knockout with 12 of them in the first round.

“You have to understand that I was still only twenty years old. And when you think about it, a lot of my friends were only fifteen or sixteen. That wasn’t a big difference at that age. Now all of a sudden, because I’m champion of the world, everyone expected me to be a totally together guy because of the title and what it represents. But I was just a little kid having fun.”

Amid personal strive and turmoil, Tyson’s tumultuous life outside of the ring began to emerge. Hid marriage to actress Robin Givens was heading for divorce, and his future contract was bought by boxing promoter Don King and Bill Clayton. Tyson fired his longtime trainer Kevin Rooney, who took over his training after D’Amato’s death, and he also parted with his manager Bill Clayton.

Amidst the disarray in his personal life, Tyson lost the undisputed championship to Buster Douglas on February 11, 1990, in a fight held in Tokyo, Japan. The knockout victory by Douglas over Tyson is often described as one of the most shocking upsets in modern sports and boxing history.

“And I was lost. By the time I won the belt I was truly a wrecked soul because I didn’t have any guidance.” 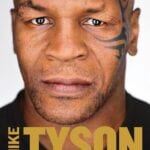 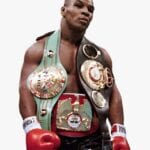