Contrary to what you see in the news and on social media, everyone is trying to figure it out. From your favourite celebrities, politicians, writers, athletes, mentors, parents and everyone in between. We live in a world where, we are all supposed to perform for the world in almost all our engagements, such as interacting with our work colleagues, partners, well-curated social media posts etc. We are all supposed to know what we are doing, we ought to have it figured out at some point, but the reality is that we are trying to figure out a particular aspect of our life. For Example, the former president of the United States, Barrack Obama, was battling cigarette addiction at some point.

We put up a mask anytime we are in public: performing, acting, conforming, blending in, making no waves, not disrupting the status quo, staying in our comfort zone etc. Mark Twain once said, “We are all in the gutter, but some of us are looking at the stars”. The difference between most of us and those we admire and look up to is that they permitted themselves to be great. Despite the fears, they took the risk, which made all the difference.

Be yourself; everyone else is already taken. – Oscar Wilde

Here are some lessons learned from some of my favourite people in the world. They share their struggles, pain, and tribulations that further humanize them. We place a lot of successful people on high pedestals, but by reading their biographies and listening to their speeches, you would see a pattern of each and every one of them trying to figure it out like everyone else.

Barrack Obama – Battles with Smoking addiction and conquering it

In his memoir: A Promised Land, former president of the United States of America, Barrack Obama, writes about his struggles with trying to quit smoking and how he eventually dealt with it. He writes:

THERE WAS A final stress reliever that I didn’t like to talk about, one that had been a chronic source of tension throughout my marriage: I was still smoking five (or six, or seven) cigarettes a day.
It was the lone vice that had carried over from the rebel days of my youth. At Michelle’s insistence, I had quit several times over the years, and I never smoked in the house or in front of the kids. Once elected to the U.S. Senate, I had stopped smoking in public. But a stubborn piece of me resisted the tyranny of reason, and the strains of campaign life—the interminable car rides through cornfields, the solitude of motel rooms—had conspired to keep me reaching for the pack I kept handy in a suitcase or drawer.

I was still smoking five (or six, or seven) cigarettes a day. It was the lone vice that had carried over from the rebel days of my youth.

After the election, I’d told myself it was as good a time as any to stop—by definition, I was in public just about anytime I was outside the White House residence. But then things got so busy that I found myself delaying my day of reckoning, wandering out to the pool house behind the Oval Office after lunch or up to the third-floor terrace after Michelle and the girls had gone to sleep, taking a deep drag and watching the smoke curl toward the stars, telling myself I’d stop for good as soon as things settled down.

“Sometimes it didn’t matter how good your process was. Sometimes you were just screwed, and the best you could do was have a stiff drink—and light up a cigarette.”

Obama finally quits smoking after his first child, Malia frowned at smelling a cigarette on his breath. He decided to finally quit after that incident. He writes:

“Initially, the pool game had also given me an excuse to duck out and have a cigarette on the third-floor landing. Those detours stopped when I quit smoking, right after I signed the Affordable Care Act into law. I’d chosen that day because I liked the symbolism, but I’d made the decision a few weeks earlier, when Malia, smelling a cigarette on my breath, frowned and asked if I’d been smoking. Faced with the prospect of lying to my daughter or setting a bad example, I called the White House doctor and asked him to send me a box of nicotine gum. It did the trick, for I haven’t had a cigarette since. But I did end up replacing one addiction with another: Through the remainder of my time in office, I would chomp on gum ceaselessly, the empty packets constantly spilling out of my pockets and leaving a trail of shiny square bread crumbs for others to find on the floor, under my desk, or wedged between sofa cushions.”

I’d made the decision a few weeks earlier, when Malia, smelling a cigarette on my breath, frowned and asked if I’d been smoking. Faced with the prospect of lying to my daughter or setting a bad example 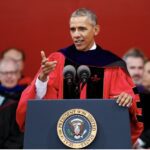 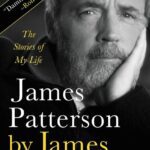