Book Summary: It’s Your Ship: Management Techniques from the Best Damn Ship in the Navy by Captain D. Michael Abrashoff.

In It’s Your Ship: Management Techniques from the Best Damn Ship in the Navy, Captain D. Michael Abrashoff shares his experience commandeering the once-underperforming destroyer USS Benfold, to becoming the best ship in the U.S. Navy’s Pacific Fleet.

He reflects on lessons learned, successes and failures made and leadership principles garnered  leading the ship.

“My biggest mistake was to focus down the chain of command, trying to improve my ship and my crew, instead of seeing myself as one captain in a battle group.I didn’t do enough to collaborate with my fellow captains as a member of a larger team. Instead, Benfold’s achievements stood on their own, and as a result the battle group wasn’t as strong as it could and should have been.”

“It’s your ship” is the watchword on the USS Benfold, used as a metaphor for taking responsibility. He writes:

“In the beginning, people kept asking my permission to do things. Eventually, I told the crew, “It’s your ship. You’re responsible for it. Make a decision and see what happens.” Hence the Benfold watchword was “It’s your ship.” Every sailor felt that Benfold was his or her responsibility. Show me an organization in which employees take ownership, and I will show you one that beats its competitors.” 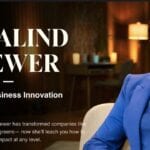