One of the most exciting things about living in the west is the access to a good, functional public library and the reading culture in general. Growing up in sub-Saharan Africa/Nigeria, I did not have access to the luxury of being able to borrow 50 books from the library every 3 weeks, borrow 10 audiobooks every month, get access to a multitude of magazines such as Entrepreneur, Wired, Times, Fast Company, The Economist, all for free,.

The public library allows users to borrow digital versions of popular magazines such as Times, Wired et al through platforms such as RB Digital, Flipster, BookMyne, and others. The technology world is filled with stories of great entrepreneurs that founded their corporations through insights from a magazine article or a report.

In 1974, Paul Allen showed Bill Gates a magazine article about Altair 8800, the world’s first Microcomputer. Recognizing a huge opportunity, Bill Gates and Paul Allen called the ManufacturerMicro Instrumentation and Telemetry Systems (MITS), in Albuquerque, New Mexico, and convinced the president they had written a version of BASIC, a popular computer programming language for Altair. That was the beginning of one of the most successful corporations of the 20th century, Microsoft. It all started from insight garnered from a magazine article.

While working at the hedge fund in 1994,

Bezos came across the statistic that the web had been growing by more than 2,300 percent each year. He decided that he wanted to get aboard that rocket, and he came up with the idea of opening a retail store online, sort of a Sears catalogue for the digital age.

I remember reading an article when I was about twelve years old. I think it might have been Scientific American where they measured the efficiency of locomotion for all these species on planet earth. How many kilocalories did they expend to get from point A to point B? And the Condor 1 came in at the top of the list, surpassed everything else. And humans came in about a third of the way down the list which was not such a great showing for the crown of creation. And — but somebody there had the imagination to test the efficiency of a human riding a bicycle. A human riding a bicycle blew away the Condor, all the way off the top of the list. And it made a really big impression on me that we humans are tool builders. And that we can fashion tools that amplify these inherent abilities that we have to spectacular magnitudes.And so for me, a computer has always been a bicycle of the mind.Something that takes us far beyond our inherent abilities.

And I think we’re just at the early stages of this tool. Very early stages.And we’ve come only a very short distance. And it’s still in its formation, but already we’ve seen enormous changes. I think that’s nothing compared to what’s coming in the next hundred years.

I stopped reading the daily newspaper, listening to the news and I am kind of not on social media, I try to regulate the kind of information I consume. The magazine format is one of my favorite ways to learn what is going on in the world.

Strategy: Borrow from the public library through platforms such as RB Digital and Flipster, 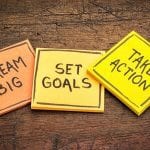